The scenic board wiring is now more or less finished, all to my usual untidy but logical standards.

As with the fiddle yard, the orange wires are soldered to the turnout frogs and will be connected to the point switches in due course.

Because the layout is likely to be laid out on a table or bench for operating sessions, I am making the wiring connections between the baseboards easily accessible. For the track power feeds I am using Phono sockets and leads, mounted as this photo. 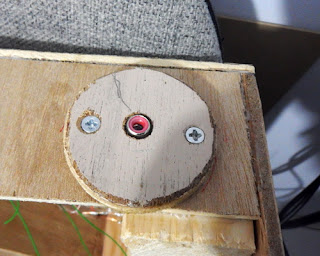 The scenic board has 3 such sockets - one at each end for connections to adjacent baseboards via jump leads, and a central one for plugging in the controller. 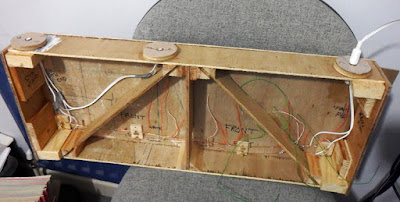 Using these sockets I can plug a controller into any single board for test purposes. I can also isolate a board easily when the layout is up and running, to help find short circuits.

I have adapted my DCC controller so that it can be plugged into any one of these sockets. I can also plug in a DC controller (though not at he same time, of course). DC can be used for testing the layout and test running locos before I fit decoders. DCC will be used to test locos with decoders fitted, or for when the layout is in operation.
Posted by Wandering Ash at 21:30 No comments:

I have now installed the first turnout mechanism and conducted extensive testing. After much deliberation, I chose a wire-in-tube system operated by a small slide switch. I needed a system that was compact, but accessible. The big problem with slide switches can be that they move such lightweight baseboards when being operated. The ones I finally chose require only a light touch, so are not too bad in that respect.

I incorporated an omega loop in the mechanism. I mounted the omega loop and the slide switch on a plywood strut extension from the back of the baseboard. It looks odd at the moment, but the strut will provide intermediate support for a shelf I plan to install later. Everything will then look much neater. 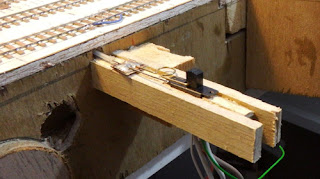 The strut is basically a plywood sandwich with a gap for the slide switch to fit tightly into. 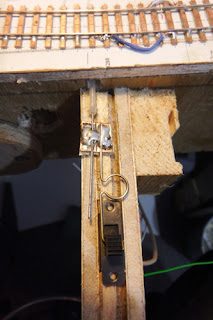 This configuration has been designed to enable the mechanism to be adjusted from above the layout if required - important when the layout is likely to be laid out on a table top or bench, rather than on legs.

This is the underside of the baseboard, showing the polythene tube containing the operating wire. The tube had been mainly secured in position with a generous amount of wood adhesive. The end next to the points is solidly secured with some scrap plywood. The end of the wire is bent at 90 degrees to engage with the tie bar above the baseboard. 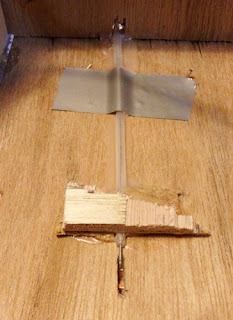 I am using a modification of the moving sleeper tie bar idea to operate the point blades. More about this another time. After extensive testing, I am reasonably happy with this concept. 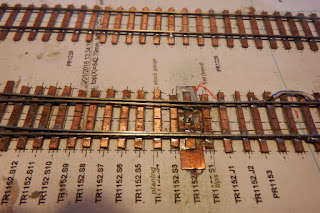 Wiring on the main baseboard has begun, but is not yet far enough advanced to record here.
Posted by Wandering Ash at 22:09 No comments: