Apologies for another prolonged absence - due mainly to life, which has got in the way almost totally over the last year or more. I should be able to see more free time from now onward, but model railways will still conflict with other interests and obligations to some degree. The deadline for the 2mm Scale Association's Diamond Jubilee Layout Competition has been put back a year until June 2021, so I still have over a year to complete Burghmire. At my pace, that is unlikely, but I shall give it a try.

First on the list is to get the pointwork on the main board operational. I have continued with the idea I used on the fiddle yard. So far, the plywood projections to hold the point switches have been installed. The wire-in-tube connections from the tie bars have also been installed.

As with the fiddle yard, the protuberances look a bit odd at the moment, but will eventually help support a shelf for coffee mugs etc. so it will all look neat and tidy in the end.

Here's the underside. You can see some of the wire-in-tube installations at top right. 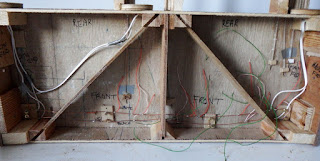 I haven't mentioned it here before, but I was working on a small 2mm finescale layout before the DJLC was announced. It has a strange history. At first, it was just a mock up for an idea I had for a new layout, made out of old scraps of plywood and timber. I then realised (with some prompting from colleagues) that I could just lay the track and it would make a great test track. It has a steepish gradient and slightly exaggerated superelevation, making it ideal for testing for any stock I build. The baseboard is such a hotch potch of bits and pieces there is only one name I can call it - 'Sadbuttrew'!

It worked fine. I even took it to a local area group meeting where a colleague tested a new loco chassis on it. The more I looked at it though, the more I saw a scenic layout emerging in my mind's eye. With that in mind, I altered the shape of the baseboard slightly and relaid a short section of track on the left hand side. This meant moving a couple of the point switches. I recently installed Blue Points for those. It is now fully operational again. There are only 4 turnouts, including an interlaced 3-way, as shown below. 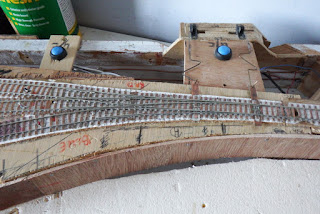 I saw this layout as an opportunity to set myself slightly loose from the straightjacket of British railway modelling. I had some nice ideas for developing it scenically, including a backscene cobbled up from fantasy artwork found on the Internet. Not quite real, but believable - in another world.

Looking back, I wish I had just continued with this layout, rather than starting Burghmire, but it's too late now.

Next on the agenda is to get the scenic board on Burghmire fully operational - basically just installing the slide switches that will operate the pointwork and connecting up a few wires. I can then start on some scenery. Hopefully, the next update won't be long!
Posted by Wandering Ash at 19:51 No comments: