Progress on the electrics continues with batteries,wires and switches, amongst other things.

On the fiddle yard, I have now finished revising the electrics for the turntable. The battery holder from the Kitwood kit has been replaced by one originally designed to hold 3 batteries. This has been adapted so that 2 batteries can be used alternately, rather than simultaneously. One battery at a time noticeably slows the rotation of the turntable, which is a big improvement. With 2 separate batteries, I can switch from one battery to the other in the middle of an exhibition if necessary, without having to physically replace a discharged battery with a charged one straight away. 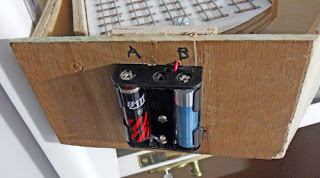 Operating the turntable now requires 3 switches. A DPDT switch controls the direction of rotation, with a centre off. A slide switch is used to select which battery to use to power the rotation. Finally, another DPDT switch reverses the polarity of the rails. A red dot has been painted on the turntable to show which switch position should be selected. Complicated, but it requires only simple components! I have also installed a 6-way socket at the extreme left of the shelf as I now require more than just track power to be transmitted between baseboards. 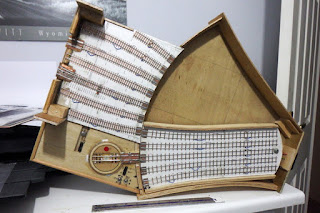 On the main baseboard, I have installed the shelf. I have added a 6-way socket to match the one on the fiddle yard board. They will be connected by a jump lead. Also added are blue push button switches for the 4 uncoupling magnets.

The uncoupling magnets have been fitted to the underside of the baseboard. I am waiting for some diodes before I finish wiring these.

Next, I shall probably turn my attention to wiring etc. for the third baseboard.