Lapsang Souchong and Other Teas

Not much to report this month – spilt tea and lots of procrastination. But all in a good cause!

Firstly, I stained the ballast to ‘blend’ it in to the surroundings. A bit of a pun there, as I used the liquid from spent teabags. The lightweight filler I used is absorbent, so the colour soaks in nicely. The Lapsang Souchong also gave a mild, smoky smell to the layout - if only briefly.

I shall do no more colouration for the time being, as more white filler will need to be applied once the buildings and platforms have been added. Only then can I begin the serious colouration. The soaking properties of the filler mean that I can use subtle washes, rather than solid paint – hopefully preserving the texture for all to see. At least I have toned down the glaring white look for now. The golden brown of the tea blends in nicely with the surrounding plywood. 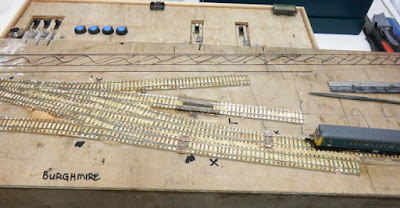 Procrastination has largely been concentrated on what stock to run on the layout. The fallback position has always been to run British Rail diesel era locos and railcars. That would be problematic for purists, as the Wantage Tramway (which Burghmire is loosely based upon) wasn’t a railway in the strict legal British sense. It operated under different rules and regulations. No signalling, no facing point locks, no one-engine-in-steam rules etc. - quite apart from the supposedly lightweight trackwork, tight clearances and tight curves that would prohibit most BR locomotives and passenger stock in real life.

Equally problematic would be creating reliable, realistic working models of almost all the motive power that actually ran on the real Wantage Tramway. The exception is the Grantham Tram, a double-deck, steam powered passenger-carrying tram which would be plenty large enough to power and weight adequately for reliable running. All other motive power was extremely diminutive. I have absolutely no intention of even beginning to think how to recreate these locomotives in 2mm scale, never mind getting them to run reliably and be able to pull trains! 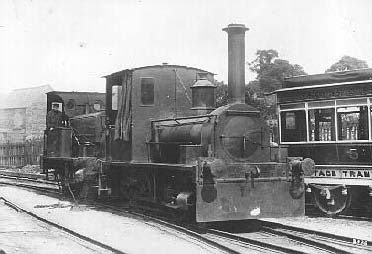 In any case, Burghmire isn’t supposed to be Wantage, even though Wantage is the original inspiration. It is an open book waiting to be filled with whatever I deem appropriate and viable. With that in mind, I shall try a number of ideas over the next few months. I have a few commercial chassis to exploit, including a few examples of the diminutive Arnold Kof which I have successfully converted to 2mm finescale in the past... ...and a few other types. I have also ordered a few oddball railcar bodies from Shapeways, amongst other things. The plan is to experiment with these over the next few months, turning down wheels, adapting commercial chassis and doing a bit of scratchbuilding.

There isn't room to work on the layout and use my workspace as a workshop at the same time, so the layout will have to be put away for a while. This blog is really about work on the layout, rather than the stock. That means I shall not be doing much in the way of updates here for the foreseeable future. No doubt the stock will appear on the layout in due course, when I can give a summary of what I have achieved - successful or otherwise ;)

Posted by Wandering Ash at 17:59 No comments: