Something I have long considered is how to create a public right of way from the archway at the back of Burghmire to the front of the layout. The platform and overall roof on the tramway rather obstruct a ground level route or even an elevated one. A subway was the only choice! Progress has also been made on the back wall for the overall roof for the tramway platform. 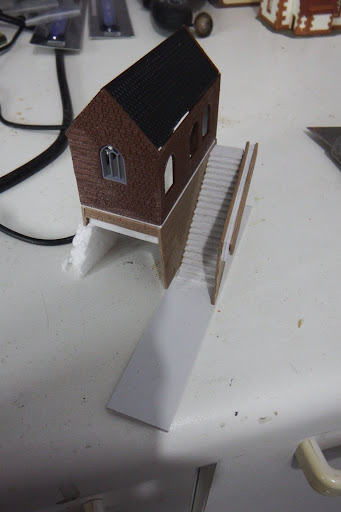 and in situ on the baseboard.... (removable for the time being) 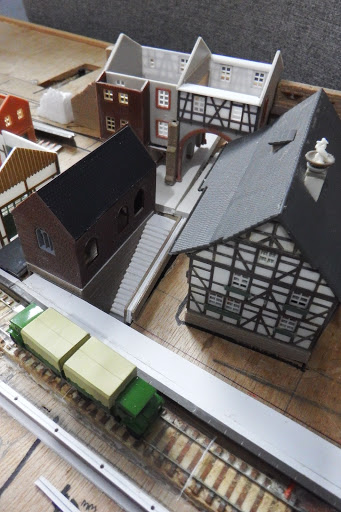 For the overall roof, my earlier plan to use thick stone pillars didn't work out in the end. There just isn't enough space, particularly behind the platform. Instead, I am constructing a plain wall with cutouts so that I can see trains in the platform from the back of the layout. Here is an impression of how it looks at the moment, with a bit more work to do. You may also see the platform and loading dock edging taking shape - constructed mainly from cut-down Peco platform edging which I happened to have available.

All the structures will be painted together in due course, to ensure some uniformity in colouration. They are currently in a protective box, as I need to do some soldering on the baseboard. A tiny track extension to allow wagons to unload better at the goods shed. Also, a small amount of rewiring where I had to remove wires to make way for the subway. I am also making the 'wooden' support structure for the front of the overall roof - mainly out of brass tube, for strength. I shall then do a thorough test of all the trackwork before I start locating scenic items permanently.

Incidentally, I found this video on Youtube that could inspire everyone. The modeller makes it all look so quick and easy!

Posted by Wandering Ash at 19:30 No comments: